In these challenging times of the Coronavirus pandemic, Taanteatro Companhia is organizing a project of international artistic collaboration based on ANTONIN ARTAUD’s essay The Theater and the Plague.

In this first, now iconic text of The Theater and its Double, originally presented as a public lecture on April 6, 1933, at the Sorbonne, Artaud developed the foundations of the Theatre of Cruelty by establishing an analogy between the disruption of civilizational order provoked by the Plague and the “convulsive passions” to be ignited by his transgressive theater poetic.

Conceived by Wolfgang Pannek, the project The Theatre and the Plague is guided by the idea of reflecting on the current crisis with reference to a now classical text of performing arts theory. It presents Artaud’s essay as a multi-linguistic video-recital performed by artists and scholars from Europe, Africa, Asia, Australia, and the Americas.

In the face of the constraints of global quarantine, each artist will work on a section of Artaud’s text and conceive and create a video-performance in a geographical or architectural environment of her/his choice. The different sections will be edited following the structure of Artaud’s text and broadcast on the internet. 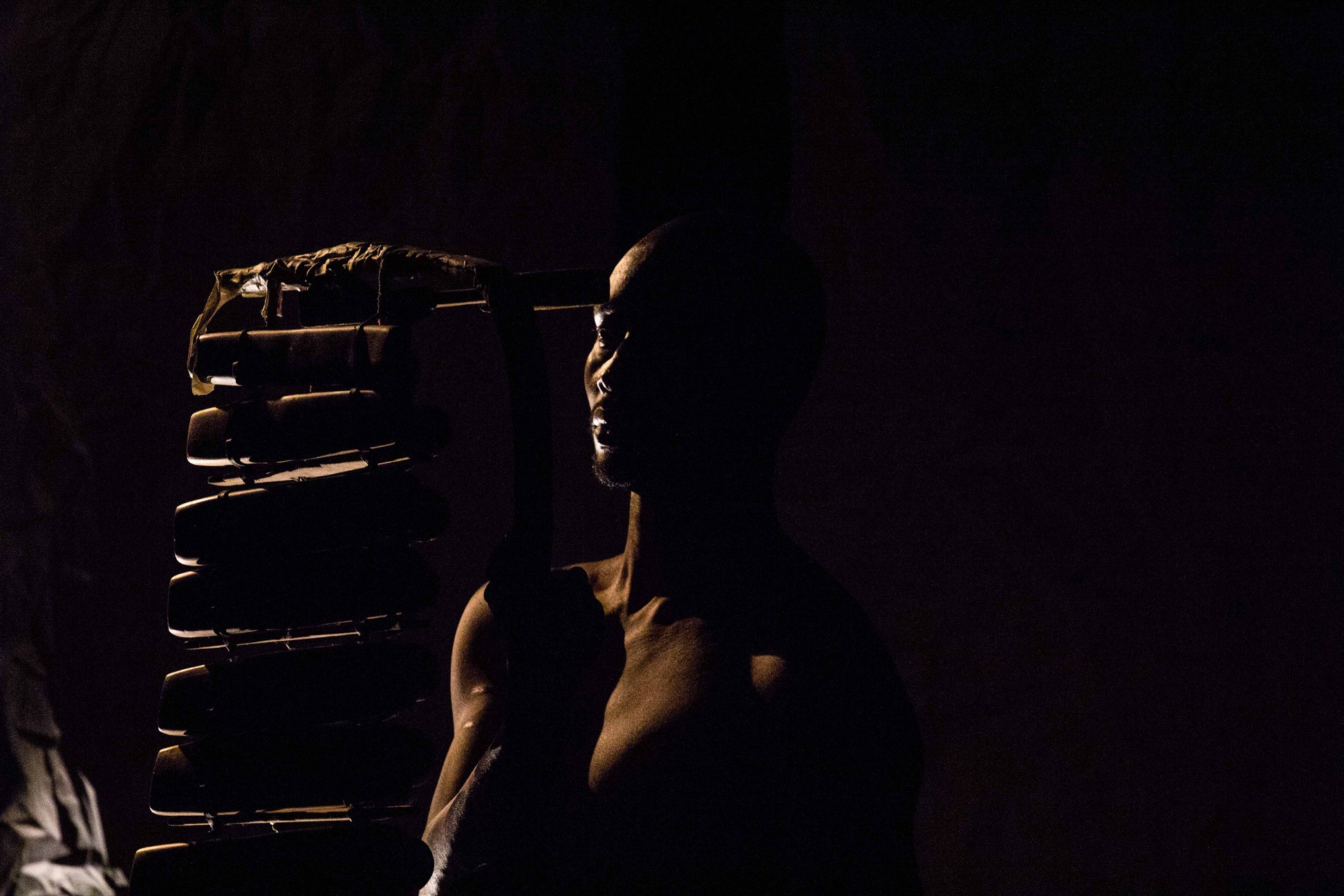 [de]colonizations signals a new direction in the ongoing choreographic research of the Taanteatro Company: the application of postcolonial studies to the field of contemporary dance.
Muncipal Dance Support Program for São Paulo City.

END_OF_DOCUMENT_TOKEN_TO_BE_REPLACED 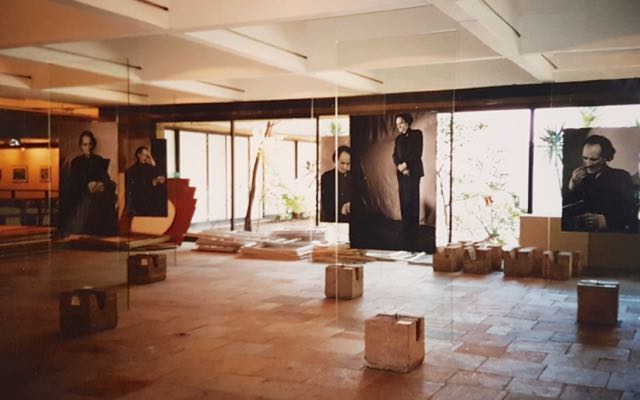 International project conceived by Wolfgang Pannek concerning the French poet Antonin Artaud (1896 to 1948) whose work happens to be of public domain in 2019. Through various activities carried out in Brazil and France Antonin Artaud: public domain investigates how the new legal status of his work will transform the public reception of the writings and ideas of the creator of the Theater of Cruelty.

END_OF_DOCUMENT_TOKEN_TO_BE_REPLACED 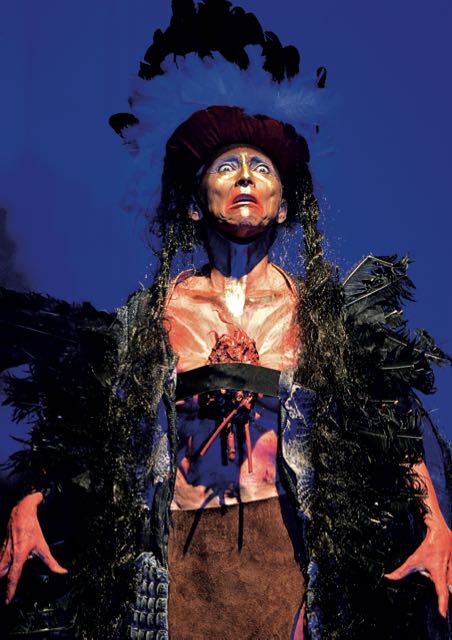 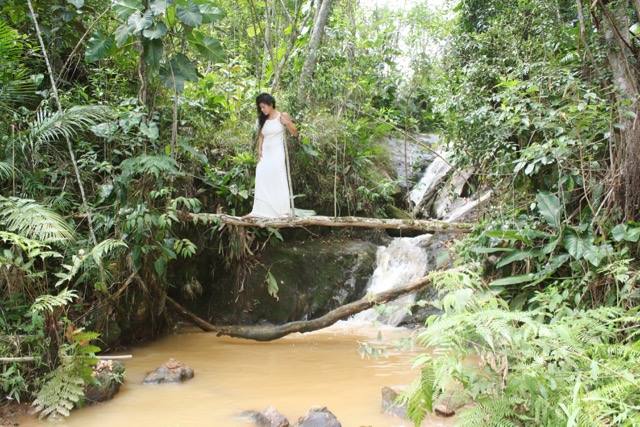 Open to all artistic fields the residence takes place at Taanteatro Company headquarters
in São Lourenço da Serra, SP, Brazil.
Artists can develop their projects with free housing and workspace.
Projects can be send any time.Format and duration of the proposal is up to the proponents.
The selection of the projects is reserved to the directors of the company.

The first resident will be the dancer Jorge Armando Ndlozy from Mozambique. 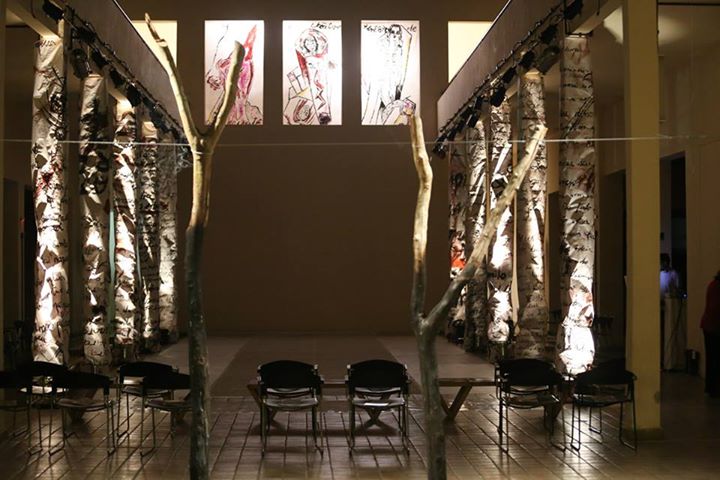 cARTAUDgraphy is an upcoming project of Taanteatro Company that will investigate the dynamics of forces that constitute the poetic territory of the life and work of Antonin Artaud (1896-1948), the surrealist poetry icon and founder of the Theatre of Cruelty.

Contemplated by the Municipal Program for Dance for the City of São Paulo – 16th Edition.
Duration: from november 2014 to november 2015 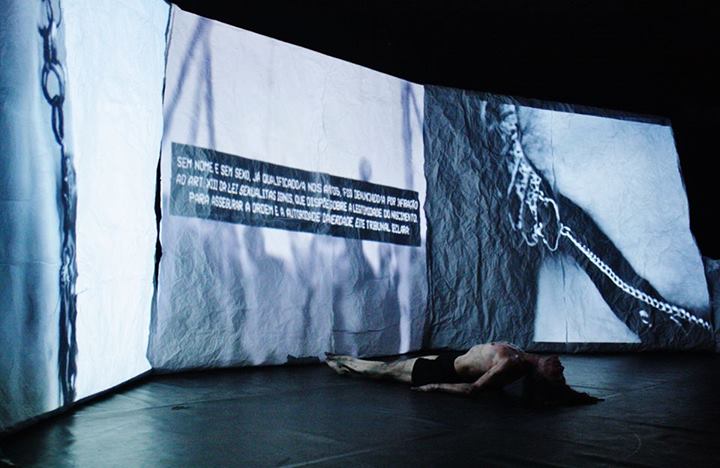 END_OF_DOCUMENT_TOKEN_TO_BE_REPLACED

20 years of research and creation of Taanteatro Companhia.
Project sponsored by the Municipal Programm for Dance in São Paulo – 11th Edition – 2012 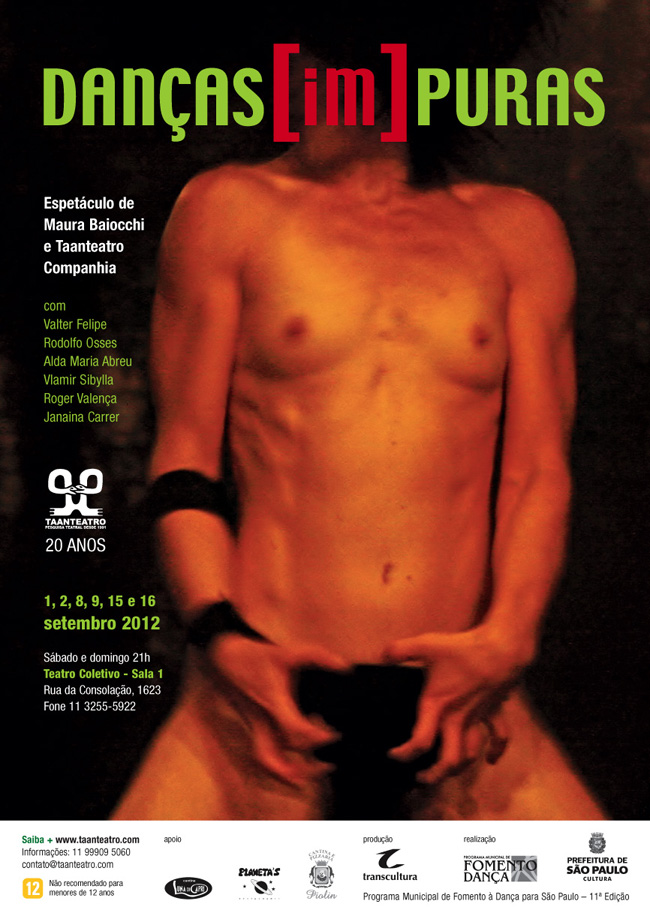 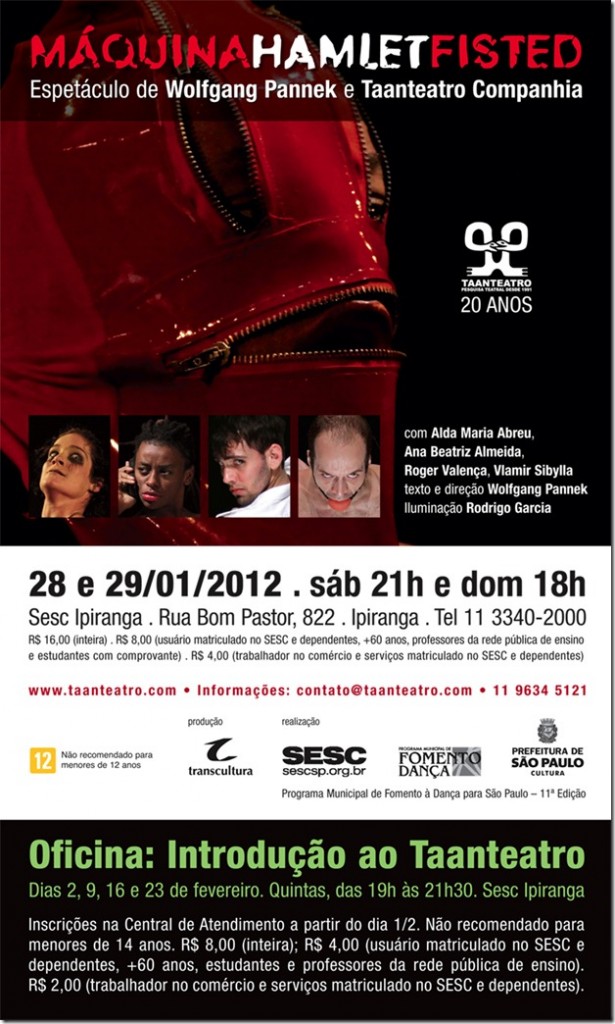 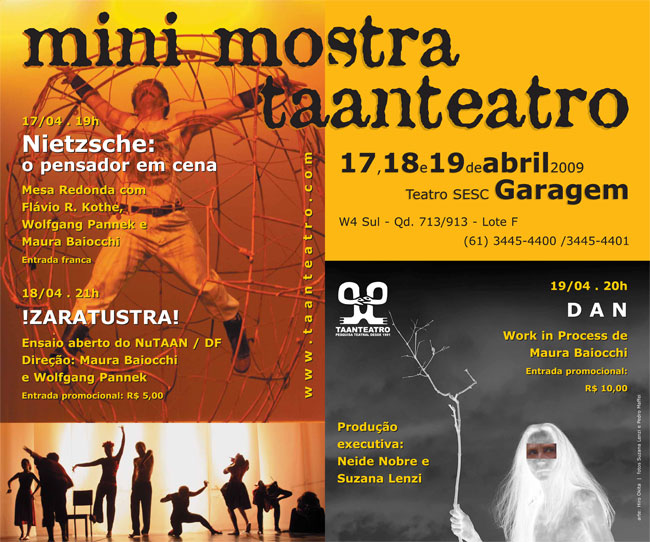 Hans-Thies Lehmann, professor for Theater Studies at the Goethe University of Frankfurt and member of the German Academy of Stage Artes, is one of the most thinkers of contemporary theater.

Amongst his writings Postdramatic Theater and Political Writing in Theatrical Texts are international references.

The Hans Thies Lehmann Brasil Tour 2010, conceived and produced by Wolfgang Pannek, co-direvtor of Taanteatro Companhia, promotes a series of lectures and seminars with Hans Thies Lehmann and Eleni Varopoulou at the folllowing brazilian universities:

Check the blog for more details